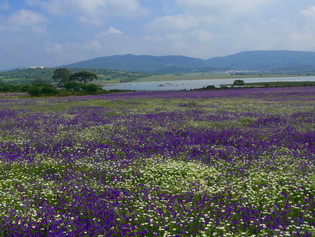 A 'painted field' near Alcala
Flora

Not my forte, but even I’ve noticed just how attractive the local flora, particularly orchids, can be especially in spring.  It’s great playground for botanists with something like 2,500 plant species in the region.  In part this remarkable diversity is a result of the varied bedrock including sandstone and limestone and the diversity of the topography.  Some are localised or endemic to the area – pride of place going to the remarkable Pinsapo Pine which is entirely restricted to Grazalema and Sierra de las Nieves and Morocco.   Many of the small plants are very attractive – again orchids, of which there are 30+ in the sierras, stand out. There's an excellent webpage - www.orquideasibericas.es - that gives details of the area's orchids (inc. maps). It’s not only individual plants that clamour for attention, but the great swathes of a handful of brightly species that paint the fields in the manner that would astonish even the keenest Fauvist!  In the Alcornocales the 'canutos' - narrow, deep valleys - are home to an unusual flora (esp. ferns).  For details see ‘The Crossbill Guide to the Andalusian Sierras’ 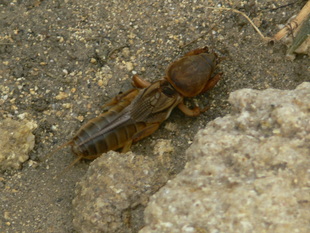 Butterflies are amongst the most well known and most sought after insects.  Cadiz province is home to some real beauties including Monarch (a recent colonist), swallowtails (Common & Scarce), Two-tailed Pasha, Large Tortoiseshell, Spanish Festoon, Cleopatra (a Brimestone with orange forewing) and a few scarcities (Common Tiger Blue & African Grass Blue). There are several excellent websites devoted to European butterflies - I find www.guypadfield.com a useful start. Many moths are similarly attractive , but less easy to find and identify (particularly as there's no handy guide to Mediterranean moths.  Happily dragonflies are now covered by an excellent guide ('A Field Guide to the Dragonflies of Britain & Europe' - Dijkstra & Lewington).  Several predominantly African species - Black Percher, Black Pennant, Ringed Cascader, Banded Groundling and Violet Dropwing - are found in this area of  southern Spain.  Remarkably the stunning Purple Dropwing only arrived in Spain in the late 1970s, but is now widespread across southern Iberian and has reached southern France. .Of the other insects, perhaps the most striking are the praying mantises (several of which can be found in the area), Migratory Locust and the large Egyptian Grasshopper.   Look out too for the curious Mole Cricket.  Beetles are many, but tough to identify as handy books are unavailable - perhaps the most interesting, are Dung Beetles. Arachnids are represented by scorpions and numerous spiders (notably Europe's largest spider the Gibraltar Funnel-web Spider.) The large Megarian Banded Centipede are often eaten by Lesser Kestrels. 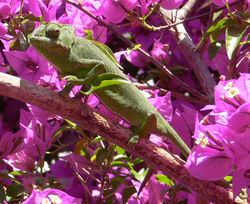 Oops, I don't do pink .....
Frogs and toads are more easily heard than seen, but the Iberian Water Frog is probably the easiest to find.  Other examples of amphibian include Tree Frog, Natterjack, Western Spadefoot, Fire Salamander, Southern Marbled and Sharp-ribbed Newts.  Snakes and lizards are common.  Spotting the large green Ocellated Lizard always excites, but other lizards are worth looking for and include Spiny-footed, Spanish Psammodromus, Spanish Wall, etc. and two curious skinks, Western Three-toed and Bedriaga's.  There are two species of gecko - Turkish and Moorish with the latter being far more common - look for them waiting for prey inside street lamps. Arguably the most sought after reptile is Mediterranean Chameleon which can be seen in a small municipal park in Rota - just ask Andrea the gardener to help you!  Amongst the snakes are Lataste's Viper, Ladder, Viperine and Montpellier Snake. Two terrapins can be found - European Pond and Spanish Terrapins. 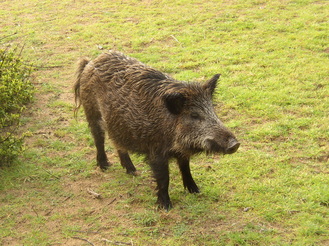 In the 'campo' the variety of small terrestrial mammals is surprisingly low - Water Vole, Mediterranean Pine Vole, Wood Mouse, Lesser and Pygmy White-toothed Shrew. Around human habitations Common and Algerian House Mouse are found. A size larger there are both Brown and Black Rats, Garden Dormouse, Blind Mole and two Hedgehogs (Common and Algerian). Rabbit and Iberian Hare are present, but heavily hunted. Oddly, given the huge oak woodlands, Red Squirrel do not occur (and neither does Iberian Lynx).  Larger terrestrial mammals include Wild Boar, Spanish Ibex, Fallow, Red and Roe Deer. Ibex are best looked for in Grazalema.  Although lacking in variety, the numbers of small mammals help to support a good range of predators Fox, Weasel, Polecat, Beech Marten, Badger, Egyptian Mongoose, Genet and Wild Cat.  Some of these these are mostly nocturnal (esp. Badger, Genet & Beech Marten), but Mongoose can be active during the day (I have seen then at Laguna de Medina and La Janda).  Otters are present in most rivers systems (inc. on La Janda).  Gibraltar famously has its Barbary Apes (disappointingly scruffy and noisome).  Unlike terrestrial mammals, a great variety of bats live in the area (esp. Grazalema) amounting to about two-thirds of Europe's total - Mouse-eared, Bechstein's, Leisler's, Schrieber's, Daubenton's, Natterer's, Greater and Lesser Mouse-eared, Grey Long-eared, Free-tailed, Noctule, Seretine,  two pipistrelles and three kinds of horseshoe bats occur.   The straits regularly host Long-finned Pilot Whale, Common and Striped Dolphins and  seasonally attract Orca, Sperm and Fin Whale (several companies offer whale watching trips e.g. www.tumares.com).