Please 'like' and share my site on Facebook
Note that my blog (see menu above) has updates to my guide and also many photos of the sites covered in my site guide (adding them to the guide makes it too large to email). 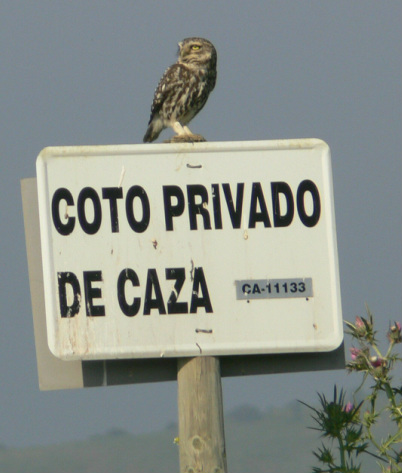 Little Owl
Overview
Why a site devoted to birding in Cadiz province?  Well, in my opinion it's the best all round area for birding in Spain (and hence Europe).  Happily, that's not just my opinion as Cadiz has been called "probably the best province for a single-base.……birding visit" to Spain ('Where to Watch Birds in Southern & Western Spain' - Garcia & Patterson); in my view the only matter for dispute is that "probably"!   The headline attraction is the migration of thousands of raptors across the straits which puts the area  in the top  rank not merely within Europe, but the world.  Great though this is, there's so much more to see here.  What and where you can discover from my detailed notes on the region (see the 'drop down' menu above left).

Thanks to good, newly constructed trunk roads transport by car is fast and relatively trouble free.  Several airlines regularly fly from the UK (and elsewhere) into Seville, Gibraltar, Malaga and Jerez.  For most birders the most popular option is staying near Tarifa which is obviously very well placed to observe raptor migration. However, if you want variety then Tarifa is rather distant from the famous shallow freshwater lagunas that dot the northern half of the province, the wilder mountains of the northern Alcornocales & Grazalema or the marismas that form the south eastern rim of the Coto Doñana.  My personal preference is to stay in the charming village of  Alcala de los Gazules which has excellent connections and is centrally located.  In fact, it's so good I bought a house there!

Although passage periods and early summer are the ‘must visit’ times, birding on a warm winter’s day can be superb. La Janda, for example, holds wintering raptors (inc. Bonelli's Eagle, Black-winged Kite  and the occasional Black Vultures) and Cranes.  One advantage of a winter trip is that whilst the UK may be bitterly cold, the mild climate in Cadiz province can make it feel like a balmy May day in England (although it can still be chilly at night).  It’s also worth remembering that migration starts early in southern Spain with some “summer visitors” arriving (if they depart at all) in February and that, for some, numbers peak in March.  Spring (Feb-April) sees the arrival not only of raptors, but also Hoopoes, Bee-eaters, a variety of warblers and other passerines.  By late spring (May & early June) migrants such as Rufous Bushchat, Olivaceous Warbler and White-rumped Swift will have arrived in force.  July and August can be very hot, but raptor migration is picking up reaching a peak in September (the best time to look for Ruppell's Vuture).  In October and November 'vis mig' on the coast can be very impressive.