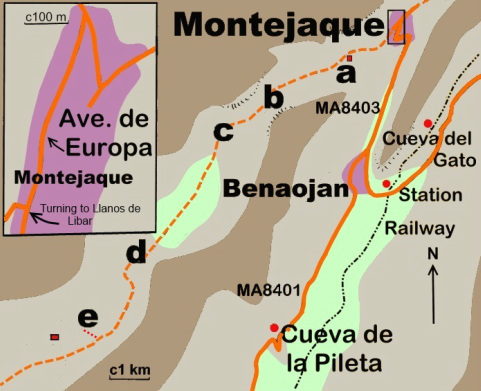 Montejaque & Llanos de Libar
I am indebted to Peter Jones (see www.spanishbirds.com) for introducing me to this fabulous site.

The Grazalema Natural Park is home (or at least a winter vacation spot) for a number of birds difficult to find elsewhere in Cadiz province.  However, what is arguably the best site of all in the park, is just over the border in Malaga province and, accordingly, I make no apologies for including it here!
Of all the places I’ve taken visitors who’ve stayed with me in Alcala, this is consistently the place that has most impressed them.

Note: In 2014 it was announced that between June and October private cars are not permitted to use this track without permission due to the fire risk. This may change so check locally

The charming mountain village of Montejaque can be approached from three directions – each with its own distractions (see map).  Arriving from the south via the MA8401  you pass much of  interest but above all the fascinating Cueva de la Pileta.  Deep in this cave are some fine ancient cave paintings – well worth forgoing a few birds to see.  This approach passes through some spectacular scenery and habitats.  Look out for Black Wheatear, Blue Rockthursh and passing raptors (Bonelli’s Eagle is quite possible). A quick stop at Cueva del Gato (an obvious rift in the cliff face off the MA7401) above the trainline can be hard to resist - listen for Golden Oriole in nearby trees and watch for both Crag Martins and Alpine Swift.

On reaching Montejaque look out for a sign to the Refugio de Libar - easiest seen as you approach the edge of the village from the north.  Take a narrow concrete village road – Ave de Europa - and then after c350m turn sharp right  for the Llanos de Libar.  NOTE:  Like all gravel tracks this one degenerates wuickly in bad weather and can need very careful negotiation at times. It's all too easy to damage the underside of a car unless you're very careful.

About 500m along this track there’s a white building on the left (a).  Stop here and patiently scan for raptors - Booted, Short-toed, Golden & Bonelli’s Eagles can all be here (and elsewhere in the valley) - and check all 'buteos'  carefully as Long-legged Buzzard has been recorded.  Both Rock Bunting and Melodious Warbler can show well here and I’ve heard Golden Oriole and Wryneck from this point. In winter all rock faces should be scanned for Wallcreeper which has turned up in recent winters.  About 400m further on (and just past a second track coming up from the village) there’s a large stony field (b) and, a little further up, a small roadside pool.  The field may have both Common and Black-eared Wheatear, Blue and, occasionally, Common Rockthrush and the pool sucks in thirsty birds. Continuing uphill you come to a rocky ‘saddle’ (c2.6km) which never disappoints (c).  This a great spot for Black Redstart, Black-eared and Black Wheatear, Rock Bunting and Rock Sparrow (listen for a sparrow with a bad cold!) – and Lesser Kestrel in its ‘natural habitat’.  In late autumn and winter this is the spot for Alpine Accentor and Ring Ousel.  Go uphill another kilometre or so (3.7km) and park under a tree just round the bend (d).  If you haven’t heard them already, listen here for Orphean Warbler.  Dartford Warbler hide in the scrub as does Spectacled Warbler; more effectively so as they still elude me here.  As you continue the rocks, surprisingly, give way to a large flat field.  At the far side of this area go through the gate and on into the oak woodland (e). These open woods have Mistle Thrush, Jay, Common Redstart, Bonelli’s Warbler, Iberian Chiffchaff and Subalpine Warbler. Continue until the woods thin out (8.8km) and park by old iron gates. The open grassy area beyond has Iberian Grey Shrike and listen for Chough.   The path continues from here to Cortes de la Frontera but is closed to vehicles)  and you reach an open area near the Refugio.  Scenically this is a stunning area and a geomorphologist's paradise.  Numerous flowers include Yellow Bee Orchid and peony

Access – As long as you take care access to Llanos de Libar is generally straight forward (map & notes above), but use extra care after heavy rains
(esp. on the ‘uphill section’ just after you enter the woods where the track is quickly degraded).