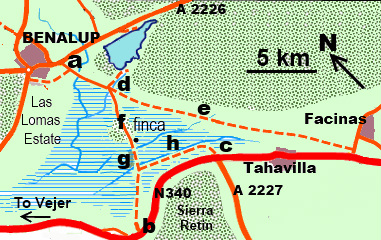 La Janda
La Janda can be accessed from near Benalup off the A 2226/CA 212 (a) and from two turnings off the N340 (b & c).  Entering via (a) a good concrete track runs south towards Facinas. Check the fields on the left as you drive along the track here as they sometimes hold Little Bustard. There are several points between (a) and (d) where a quick stop may be productive.  About 4 km from the turning off the A 2226  an old 'oxbow' appears to your right.  When muddy this can be an excellent spot to stop and scan for waders (esp. if there's little suitable habitat along the main track across la Janda); during passage periods Wood, Green,and Common Sandpipers, Greenshank, Little Stint, etc.

A little further you reach a bridge over a small stream (d)  where a road branches off to follow a drainage channel up towards the Embalse de Celemin. This ditch can be good for Purple Gallinule and it’s often worth scanning here for raptors over the wooded hills. The other side of the bridge there’s a small marshy area that often has wintering Bluethroat.  Just after the bridge the track heads towards Facinas (e); once in very poor condition this track was regraded and improved in 2011 and is now signposted (look for orange tipped finger posts). In summer check for Red-necked Nightjar along here.  If you do take this track look out for Spanish Imperial Eagle, imm. Bonelli's Eagle and Black-winged Kite and check all birds of prey carefully; a Pallid Harrier wintered here in 2013/14 and Long-legged Buzzard have been seen in the past. In summer 2012 the track was easily drivable until roughly opposite Tahavilla where several deep depressions required careful driving esp. when wet.   The road is poor for c1 km until it reaches a bridge over a channel after which it improves again.  The channel here can can be worth a closer scrutiny - Hoopoe are often found in this area and flocks of Corn Bunting can exceed 200 birds.   In winter or after a wet spring you'll probably need a 4x4 to complete this route.  If tackling it from Facinas take the first track on the left after leaving the N340. (now marked by a large signboard).

Back at (d) an alternative is to take the recently improved section of track up to a low ridge (f) and then on to La Janda.  The ridge can be a good place to spot passing raptors. The track reaches a small farm where it drops down onto what was once the bed of a huge lake. A large sluice gate and a tree choked channel  (g) running alongside the track marks another good place to stop.  Early in the mornings and again in the evening is a good time to look for Black-winged Kite.  Now a regular breeding resident here with up to 40 birds in winter - check the irrigation superstructures for them. During migration periods the whole area can be alive with Back Kites, Montagu’s Harrier, etc. The tree choked channel is the site of a large heronry consisting mainly of Cattle Egrets with a sprinkling of Little Egrets and a few Glossy Ibis. Stay in the car and remember your camera to grab some great shots of these attractive birds.

The track then crosses a large irrigation ditch and by turning left you head along the main track across La Janda (h) and towards the exit opposite the A2227  to Zahara.  Check the main ditch for Otters which are sometimes seen here (but don't confuse with Mongoose which also occurs)  In season this track passes flooded rice paddies which attract large numbers of White Stork, Glossy Ibis, waders etc. and the ditches conceal Purple Gallinule, egrets and herons.  Check sparrows here (as elsewhere) for Spanish Sparrow .  Common Crane winter here and where the track (c) rises towards the N340 (E5) you gain an excellent view across the area – often useful for pinpointing flocks of this species.

Access: From Benalup take the CA212 towards Los Barrios and turn at (a).  From the N340 take the track at (b) or at the turning for Zahara at (c).  As noted above the tracks here can be in poor condition and most are ‘off limits’.