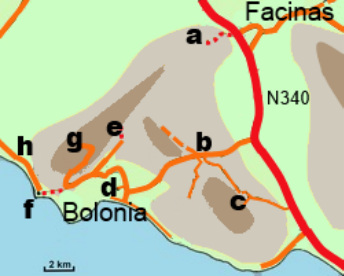 The Bolonia (or El Lentiscal)  area has a good mix of birds since it has a good range of habitats including shoreline, woodland, old olive groves,  scrub, poor agricultural land, rocky crags.  Not only that, but it is also on a migration route for raptors, is a well known site for both Little and White-rumped Swift and Rufous Bushchat. Rufous Bushchat has declined sharply in southern Spain and can now be very hard to locate.  Familiarising yourself with the song can help enormously. Exploring this area on foot is made easier by a number of good footpaths.  I have not attempted to indicate them all on the map here but  the local information centre near La Pena on the Tarifa road has excellent leaflets and many are shown on notice boards.   Many are detailed on an excellent new leaflet (see - http://adsise.com/).

The E5/N340 (the main coastal road) can be very busy, but there are several places where you can pull off to explore the olive scrub along the road which sometimes holds Rufous Bushchat. A track up to the wind generators opposite the Venta de Facinas (a) is one such location.  Alternatively you can look at the bushes near Hotel San Juan de la Rivera at the turning for Bolonia; this is an excellent stop for good reasonably priced tapas.

At the top the hill is “Puerto de Bolonia” (b) where there’s an ‘official’ raptor watchpoint.  In stronger easterly winds, there can be a good passage of raptors (Black Kite, Booted & Short-toed Eagle, Honey Buzzard, Griffon Vulture, etc.) and storks.  Swifts and hirundines also hawk along this ridge.  The track running NW along the ridge is worth exploring – for birds such as Tawny Pipit, Black-eared Wheatear & Rufous Bushchat . A sendero (footpath) branches off this track and loops round back to the road – a good walk for the more energetic (but note that the footpaths leaflet warns you to check locally to see if this route is open).    Two roads run SE from here – one to Betis and another to El Chaparral.  These allow access, via several footpaths (c) to the slopes of the crags (San Bartolome) south of the watchpoint.  The slopes of this rocky hill look well worth a careful exploration.  Storks and raptors tend to drift along this ridge and the woods can hold migrants – once again keep a sharp eye open for Rufous Bushchat  although this species is in decline and has vanished from several former strongholds. The road here drops down back to the N 340 (Note some roads in this area are marked as restricted military roads)

The small beach resort of El Lentiscal (Bolonia) offers a variety of fast food outlets and bars – from many of which raptor migration or seabird passage (Cory’s and Balearic Shearwaters, Gannets, etc) can be watched in comfort. Footpaths also fan out along the coast and mat repay investigation. A small stream flows into the sea here and the scrub along its banks can be worth a careful look as can the muddy foreshore (e.g. for Kentish Plover). Entry into the Roman ruins (d) is free for EU passport holders and even if you have no interest in history is a good diversion since the grounds have obliging  Black-eared Wheatear, Sardinian Warbler and Stonechat.  Once again look out for Rufous Bushchat  along this road, but also check any low flying swifts with care ..

Heading up the minor road past the ruins the road you reach more buildings where a concrete track turns off to your right and into the hills.  Follow this until it ends in a small finca where the track turns sharp right and through a gateway - another 100m along the track there's hide.  The huge cliff it faces had breeding Griffon & Egyptian Vultures and is a good spot for Bonelli's Eagle.   Most birdwatchers tend to ignore the footpath off towards the sea in their rush up to look for swifts, but if you’ve time a walk down to Punta Carmarinal (f) can be a pleasant diversion. From the lighthouse you may pick up Audouin’s Gull, Cory’s & Balearic Shearwater.  The lighthouse can be approached from Zahara de los Attunes through the plush residential area of Atlanterra (the road from Bolonia does not connect with this area.  The route round by car takes roughly the same amount of time as it does to walk back up to the Bolonia road from the lighthouse.

Continuing up the road you reach the Sierra de la Plata.  Here you have not only have superb views across to Africa, but a chance of all 5 species of European swift.  Further along the road there’s a small pull-in opposite a craggy cliff face pierced by a small cave (g).  This is a classic site for White-rumped Swift and, in recent years, Little Swift (although the latter is much easier in the Chipiona area).  Mornings and late evenings are usually best for these rare swifts, but the truth is that they can be very elusive and you need luck to get them on your first visit.  (That said, some people have seen them easily here as well along the small stream the discharges into the bay).  However, your wait can be enlivened by Egyptian Vulture, Griffon Vulture (which nest on the rock face above the road), Crag Martin, Blue Rock Thrush, Rock Bunting, Golden Oriole and, in season, passing raptors (Lanner have been seen here).  Further up the road the woods can be worth investigating for butterflies (e.g. Two-tailed Pasha).

Atlanterra (h), which is reached via the N340 and Zahara can also be good for White-rumped Swift – with birds sometimes seen over the river here or the middle of Zahara.  However, your best bet is to drive into Atlanterra, past the ugly sprawl of hotels and then park in a small car park on the left (about 250m after the last large hotel complex).  The swifts can be seen from here, but for better views climb up the steep road past palatial holiday homes until you overlook a rocky crag and have panoramic views over Zahara.  (Note the fields along the road from the N340 to Zahara still has a few, elusive Little Bustards).


Access: As noted above some of the roads have old signs warning that they are restricted military roads – this can safely be ignored when driving up to
(g) as this route clearly has ‘touristy’ car parks & notices.  I am less certain about (d) and (j). Not all footpaths appear to be open see leaflet  -
http://adsise.com/.