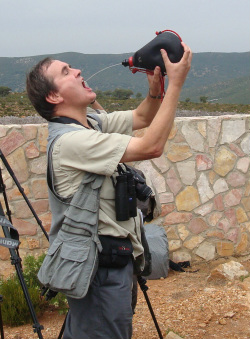 Birding in the Alcornocales September 2010
OK, the title of this page has already established that it's the dullest and most boring of the lot, but several people have suggested that I ought to introduce myself more fully. My earliest birding memory is of seeing Storm Petrels on Lundy when I was about 6. I first became aware of what 'stringing' meant about five years later when I realised that they were actually House Martins!  Give me credit, though, for my precociousness in actually having heard of Storm Petrels at such an early age.

I've been birding seriously since the 1960s - first in my native Hampshire and then in my adopted home county of Kent.  I served on the Executive Committee of the KOS (Kent Ornithological Society) for seven years and, for much of that time, I edited the society's newsletter.  I was previously leader of Canterbury RSPB Group. I taught History and Social Studies in secondary schools for over 35 years, but going part-time in 2000 allowed me to also work as a Field Teacher for the RSPB at Dungeness. I retired from teaching in 2010, but continued to work for the RSPB until 2013.

I first visited Andalucia in the late 1960s, but didn't revisit the area until 2000 when I persuaded my wife it wasn't all a 'concrete costa'.  Fortunately, I managed to convince her of this so well that we now regularly visit the country.  From 2005 my visits have been based in Alcala de los Gazules (Cadiz Province) where I have a  small house.  I currently visit the area two or three times a year often spending 4 or 5 weeks in the area each visit.  During this time I have written a guide to birding in the area which now runs to over 100 pages and 60 original maps.  A second, shorter, guide is also availble for those on a short visit. These guides are available to download for free (see tab) although suitable donations to SEO/RSPB are welcome.  Since 2006 I have helped to edit over a dozen Crossbill Guides (a series of wildlife guidebooks - see relevant tab) and was the junior author of the Crossbill Guide "The Nature Guide to the Andalusian Sierras".    I am currently working on a new guide to the wildlife of  Andalucia.   In addition, I also give talks on the area's wildlife using a power point presentation (although note that I currently do not have my own projector or screen).  Please contact me for details.