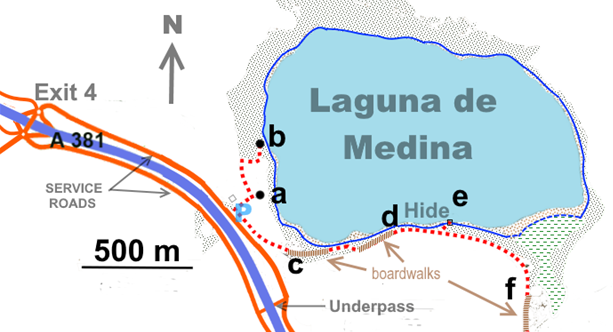 In recent years this site has been distinctly 'below par' with Crested Coot being absent and White-headed Duck relatively scarce, but in 2018 the situation improved with Crested Coot returning and numbers of wildfowl increasing

The  largest, and most easily accessible, of the lakes in this region  is Laguna de Medina (confusingly, much nearer Jerez than Medina Sidonia).  This site, which is a little south of Jerez, is now very well signposted off the A381.   This is a great site to visit - you can spend all morning here, but equally a 20 minute stop en route to other sites can be very productive.  Note that water levels, and with it the number and nature of the birds present, can vary enormously.  In a dry summer it can be very shallow (with waders dotting the middle of the laguna) or even dry up completely in exceptionally dry weather.

There’s a good viewpoint behind a small white building by the car park (a) from which a  path takes you to a second viewpoint (b). The views across the lake are excellent, but rather distant (a ‘scope is essential).  Carefully examine the birds to your right here from (a) as it has the reputation for being good for Crested Coot (for which this is a key location).  Unfortunately, due the the presence of carp - which colonised the laguna recently after the area was flooded - the number of Crested Coots present here has crashed (as have numbers of Common Coot & White-headed Duck).    At long range a 'scope is vital to see the characteristic features.  Far fewer Coots at all were present in February 2013 whilst in January 2016 a friend visited and found none at all (previously huge flocks virtually carpeted the laguna).  Fortunately by 2019 the coots had returned in good numbers and with them a few elusive Crested Coots, but this continues to be a fairly volatile situation

A path snakes along the southern border of the lake and two raised wooden walkways here have improved visibility (and largely resolved the problem of the path being flooded in wet weather).  Check the tamarisk bushes alongside the first walkway for Olivaceous Warbler (c) and from the second walkway look carefully for Crested Coot (which used to be regularly seen here). A path snakes its way off this track to a hide (e) which which can be good for all the typical birds (although the overlarge windows mean birds can clearly see its occupants and often flee unless you’re careful).  Despite the notice at the end of the track the path (sendero) can now be followed across a wooden causeway ultimately to link to Lagunas de Puerto Real (it's too far to walk and only cyclable for the fit).  This area can also be accessed via a minor road.  Savi’s Warbler is possible in the marsh here (﻿f﻿).  Despite what has been written elsewhere, there is not a path around the whole lake (rumoured plans to install one have yet to come to fruition and probably never will).

As noted above, the numbers of White-headed Ducks (another iconic bird at this site) may also suffer from the presence of carp in the laguna but have gradually returned (although not perhaps to their highest number).  Both  Ferruginous Duck and Marbled Duck (e.g. 6 in Sept. 2010) are regular in small numbers (esp. during migration).  Also present are good numbers of other waterfowl (inc. Red-crested Pochard), herons (inc. Night Heron, Little Bittern and, increasingly, Great White Egret),  Purple Gallinule, grebes (esp Black-necked), gulls and marsh terns (sometimes including White-winged Black as well as the more expected Black and Whiskered Terns).  Flamingo are regular and a variety of waders appear especially when water levels are low.  Pratincole often hawk over the area (esp. mornings and evenings during migration periods) in good numbers. Large numbers of hirundines (inc. Red-rumped Swallows & Crag Martins) and swifts (both Common and Pallid) can also be seen here

Passerines may include the ubiquitous Stonechat, Corn Bunting and Crested Lark.  Reedbeds hold Reed and Great Reed and Penduline Tit (the latter  in winter).  (Note: Contra to some reports Moustached Warbler is not found here although Sedge Warbler is a common  passage migrant…….). The declining Rufous Bushchat may still be present, but most recent records seem to be of migrants.  Melodious Warbler is common and, later in the season, there are much smaller numbers of Olivaceous Warbler (both frequent the dense tamarisk scrub so knowing their songs helps).  Surrounding farmlands have Stone Curlew and all the more familiar Spanish raptors may be seen in the area.  Having increased enormously in Cadiz province in recent years,  Black-winged Kite are now regularly found here (esp., but not exclusively, towards dusk).  For this species (and other raptors) try taking the first turning to the south off the service road just beyond the underpass (see map).

If Crested Coot is your main target, the laguna is probably no longer the prime site to check, but of all the lagunas in the area it remains the most easily visited being just off the A381.  In recent year I have found the Lagunas de Espera, Lantejuela and del Puerto de Santa Maria (esp. Laguna Juncosa after a wet spring) - see my notes for details.

Access - The Laguna de Medina is just east of the A381 autovia about 5km south of the junction with the E5/A4.  It is well signposted, off this main road near a large concrete works.  The path continues beyond the turning to the hide for a few hundred metres offering occasional glimpses at the ‘back’ of the laguna – often the best area for herons, ducks etc.  Although it “ends” in a small loop you can continue along the cycle track and board walk for with views over a reedy stream and nearby farmland.